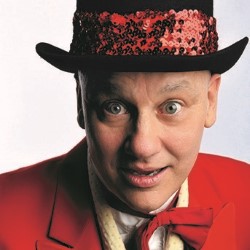 A previous Fringe award winner, and more famous for being an Eastenders actor, Terry Alderton brings us his “musical“.

Please don’t expect The Sound of Music or Annie! This “musical” is hard to describe! We have instruments, we have music and we also have at least two Terrys at any given time.

You certainly get a bit of everything, dancing, singing, impressions, gags. What is really noticeable is Terry’s physical presence, flailing his way across the stage and into the audience like a demented cross between Tommy Cooper, Freddy Star and Robin Williams, and even his feet have their own act!

Terry seems to have a regular following and they soon settled into hysterical laughter mode, others in the audience don’t seem to get it initially, but an amusing routine about time travel, seems to melt any resistance. Soon we are all getting into the madness of the “bipolar guy”.

If you are looking for a show that leaves you with a warm cosy glow then this is not for you.
If you don’t mind your humour a bit wacky and unusual, then sign up.