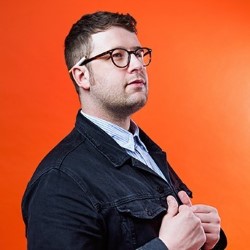 Chris is indeed a northern comic, but he’s not in the same mould as the once legendary northern club comedians of the past, no in his hand he holds not a pint of mild but his recyclable water bottle.
This is Chris’s third outing to the Edinburgh Festival, his first run earned him a nomination for the coveted last minute.com comedy award for best newcomer.
He delivers entertaining stories, snippets from which will reappear throughout the hour as they are dropped into later stories.

As the show’s title indicates he stays away from the punch line driven to a more sedate, but well considered storytelling.
What really impressed was how quickly and easily he won us over, the whole room was captivated with him as he recalled details of his challenging marriage proposal and subsequent engagement issues.

We avoid the heavyweight issues of the day and address instead the day-to-day struggles of life, his favourite restaurant, the local garage and Australia all are examined in the same insightful and humorous way.

Pure entertainment, I would suggest getting a ticket as soon as you can and make sure you bring your friends particularly if they have a nickname
*****
Reviewed by Robert
Pleasance Courtyard – Baby Grand
20.15 (1hr)
Until 25th