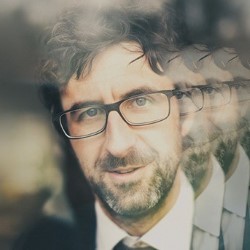 You will easily recognise Mark Watson from his appearances on Mock the week and various Channel 4 comedy specials. He is Fringe regular performing since 2002.

This is an updated version of his 2017 /2018 show, some of the jokes remain the same, some parts are updated as details about his recent divorce and its impact on his life are relayed to us.

Interaction with the audience is first-class, nothing phases Mark. He makes us all feel comfortable, as he cheerily chats with audience members.

In the queue we are handed postcards on which a pointed question is asked, these cards are projected as a backdrop to the stage.

Some selected cards are interrogated by Mark who then conjures up hilarious jokes and one liners, One example being an admission from an audience member that they actually eat Kiwi fruit with the skin on.

Of course, not everyone owns up to their written confessions.

It’s worth going if you have not been before