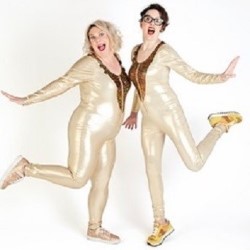 If the letters NCT, PTA, or CBBC fill you with dread then this show is for you! A show predominantly about the mysterious art of parenting.

The Mummies are Ellie Gibson and Helen Thorn who specialise in producing and performing theatrical comedy for put upon parents.

Together they produce one of the UK’s most popular parenting podcasts which has been, downloaded over 2 million times in more than 150 countries. Judging by the queues; word has spread, and large groups of dedicated fans were gathering to see their leaders speak. The Scummy Mummies are at the Fringe Festival for the first time. What took them so long? its perfect material for the fringe.

Various aspects of parenthood are explored through a mixture of song and dance routines, and witty repartee.

Sketches include dealing with the incessant demands of the PTA, a wonderful critique of characters in class 7Bs WhatsApp group.

Each individual performer also takes a solo turn at stand-up, the costumes are hilarious, plus we even get costume changes mid joke.

In a later section of the show our mummies portray a pair of trendy right on dads. We see the Dads sad attempt at buggy design and the get their take on various improvements to child birthing.

If you are a parent (or anyone) wondering where to spend that rare child free night out, then plump for this (and YES you can bring your wine into the show).