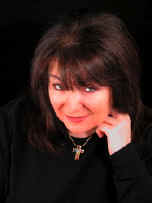 I believe Janey Godley is Innocent, I also believe she is an ethnic minority: a white, female, Scottish, comedian!

Having previously seen several good shows and knowing the sort of performance that Janey usually delivers I was a little under prepared for the side splitting hilarious hour spent in her company. Janey is guilty of having had an unusual life, not being the perfect mother or the model citizen, or so she tells us. She is also guilty of almost killing me with laughter, tears rolling down my face, jaw and sides aching, in danger of requiring fresh underwear, and oh God where is my inhaler!

But the burning question, of what is Janey Godley innocent? To find out go and see the show!

Gavin and Gavin in Colonic Irrigation for our souls... August 8, 2005 | one4review