For the first time in my numerous years last night I spent a night at the opera, no not The Marx Brothers movie, or the Queen album, the real McCoy, when Scottish Opera’s touring version of Carmen hit town in Dunfermline’s Alhambra Theatre as part of their national tour.

Carmen was originally staged in 1875 when Georges Bizet’s production was premiered in Paris and after an initial reticence on the public’s behalf it has grown into one of the world’s favourite opera’s.

Rather than the original 1800’s, this new production has been set in 1960’s Spain, a country domineered by the extremely right wing General Franco’s dictatorship, a regime where women are oppressed, the populous suffering extreme poverty, smuggling and black-market activities commonplace and gypsies forced to live in ghetto’s.

The time is apt for a feisty beautiful woman to try to escape and the eponymous character uses her wiles on soldier Don Jose to further her aims. His infatuation leads to his forsaking friends, career and principles and him becoming a smuggler in the distant mountains. But is this true love or are there twists? I’ll leave you to find out by attending.

The necessity of this production to adapt to various sized venues left the set looking a little lost on the vast Alhambra stage, and although well designed I felt the production was a little dark, both in lighting and costumes.

The cast of ten played all roles well within their ability, but the fact that the singers were un-miked and the size of the theatre occasionally made the vocals difficult to hear over an excellent orchestra under the baton of Derek Clark. There are some excellent tunes in the production many will be familiar to even  non-opera regulars like me and as I first experience of opera it was an enjoyable one. I don’t think I would ever become a regular in this medium, but I can see why others might.

Scottish Opera are taking this production on tour so if you fancy seeing where it is playing near you check out www.scottishopera.co.uk and for the varied programme that is available at Alhambra Theatre Dunfermline see www.alhambradunfermline.com 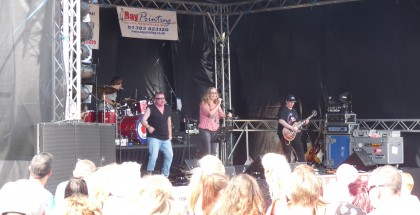