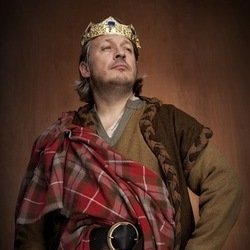 Richard Herring has always been at the at the forefront of using new media to build and distribute his work.  Nowhere is this more apparent than in the successful growth of his podcast shows.  His Leicester Square Podcast recently won a bronze at the prestigious Sony Radio Awards and in doing so became the first internet-only award winner in this section.  And now, for the third year, he brings Richard Herring’s Edinburgh Fringe Podcast (RHEFP!) to The Stand, running daily lunchtime interviews with various stars of the Fringe along with showcasing some of the best stand-up.

This lunchtime the assembled audience were treated to the odd couple that were Canadian comedian Tony Law and actor Ian Lavender.  It was an interesting combination, to understate matters somewhat.  Tony Law had overrun by 15 minutes in his own show, which had the knock-on effect of pushing back Herring’s show itself.  Herring seemed to let Law off with his lax time-keeping but appeared more willing to fight him tooth and nail in their battle for the heart of classicist Mary Beard. Their discussion took a turn for the bizarre at various points, Law’s Roger Daltrey impression for example, but Herring managed to keep the exuberant comedian in hand.  Most of the time.

The featured stand-up was Carey Marx, who I’ve only ever caught in bite-sized chunks.  However, his brilliant dissection of an overloud phone call taken by a woman in the same train carriage as him was excellent stuff and made me long to see some more.

Ian Lavender was an exciting addition to the bill, not least for Herring who got to question him on his greatest sitcom role to date, that of Gary Sparrow’s son in ‘Goodnight Sweetheart’. It was just as well that Herring had such an extensive knowledge of Lavender’s role in the time-travelling comedy as Lavender appeared to believe that he had played a different part entirely.  Before long they were wrapped up in discussing the various paradoxes that Sparrow subjected himself to as a cross-generational Lothario.  In amongst this frippery Herring allowed Lavender the space to chat about his role in the current production of ‘The Shawshank Redemption’ as well as the legacy of being Private Pike. His ability to lead a guest down these anecdotal avenues showcased his increasing skill as an interviewer.

So why should you pay for a ticket when you can download the show for free?  Well, for a start there is the chance to win stellar prizes – free tickets to shows, dvds, Haribo – all worth putting in an appearance for. Furthermore, as brilliant as it is, audio can never do justice to the visual delight of witnessing the look of absolute bemusement and befuddlement that spreads across the face of a beloved ‘Dad’s Army’ star when he is accosted by a, possibly drunk, Canadian comedian demanding to know who his favourite member of The Who is. That, dear reader, is worth the price of admission alone!

The Stand – Stand One