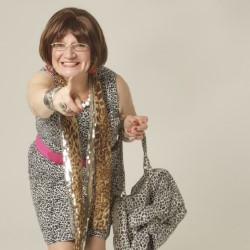 Mrs Barbara Nice, a character created by actress Janice Connelly, has been performing regularly at the Fringe for years now and there is one thing that is constant you never know what is going to happen, at times I am not so sure she does either, but whatever mayhem she creates, she is an absolute hoot and has such a hard core following, a lot of whom she seems to know.
Barbara is running a Raffle, yes a real live raffle with prizes so what it says on the ticket is true. But what it doesn’t say is that she not only doesn’t play by the rule book, she puts it through the shredder. She has a stage but barely uses it, she has stage lighting but it is never used as it makes her too hot so most of the show is performed in the aisles with the house lights on throughout.
Her characterisation is superb, she draws howls of laughter from the mostly mature audience throughout, but jokes, not so many, because she doesn’t need them, and there isn’t room in her set for them anyway.
Barbara as always has a different ending than any other show on the Fringe I am aware of. What is it? No way! Go and find out for yourself, that is of course assuming you can actually get a ticket.
****
Reviewed Geoff
15.45 to 16.45
Stand 5
Until 28th