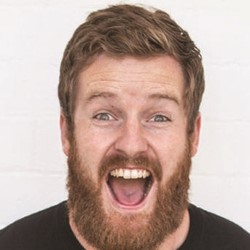 After his absolutely brilliant fringe debut last year I was really keen to see Nick Cody again but wondered if he would be able to deliver to the same high standard. He certainly did that and more. The happy go lucky Australian’s comedy timing and delivery are truly perfect. His observations and anecdotes are so relatable that he will appeal to such a wide demographic.
From his opinion of trip adviser reviewers, Airbnb, driving and his many travel experiences, Nick has the audience in the palm of his hand. He has had an extremely busy year touring, collecting more material as he goes. His girlfriend, he says, is able to stop him getting into trouble by being a few steps ahead of him. She knows how his mind works so can get him to agree to activities just by making them sound macho.
At just 29 Nick is such a talented comedian with a really bright future. His ability to float from subject to subject and back again with such ease is amazing and he has probably the best call back of the fringe. This is definitely a show worth seeing.