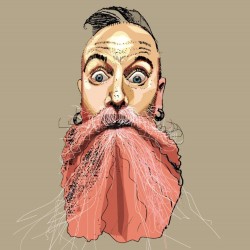 Martin Mor is a big guy, with a huge beard and a gigantic charismatic personality who is always a pleasure to listen to whether he is doing his act or MC ing a gig. He is also a hard working comic so I assumed that the title referred to him being always on the road. But no, it is about one of his many adventures in mountain climbing, yes really, to a comedy gig.
Having had his bantering getting to know you session Mor is into his set, and explains the back story of the show illustrating his hour with a ‘hi-tec whiteboard and fridge magnets’. But it doesn’t matter, Martin is a comic who doesn’t need any gimmicks or props. He relates the story, often getting side-tracked with audience interaction, especially with one guy on certain logistics of using Nepalese toilets, with possible a bit too much information here, but being the consummate pro he is, gets back on track and closes out the show to everyone’s satisfaction.
I am quite convinced that you could possibly get a very different show on another night but it wouldn’t matter, you would be getting an hour of great entertainment and would never feel short changed.
****
Reviewed by Geoff
Stand 2
20.20 to 21.30
Until 28th (not 15th)