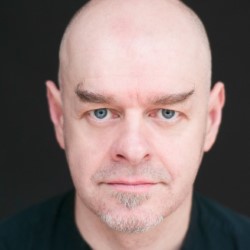 Paul Thorne is an interesting comic, with plenty to say on a lot of topical issues, from the Home Office deportation list, to a succinct summary of US voter trends; from the BBC’s terrified weather reporters, to a Taliban lullaby, from the results of Richard Branson’s disappointing birthdays to scary current world leaders.

He sings about the rain in Warrington, and does a great racing reporter on the Four Horsemen of the Apocalypse. His take on germs is a big worry for my OCD tendencies, and his pretend phone-call goes a bit awry at one point, but he brings it back. His audience banter works well.

Thorne identifies a large number of possible causes of total planetary melt-down, all without being too stressed about it himself. He’s very chilled for someone talking about total annihilation, one way or another. In a final song blaming the US for all the ills in the world, he turns it right around to set the blame elsewhere. Oops, Britain!