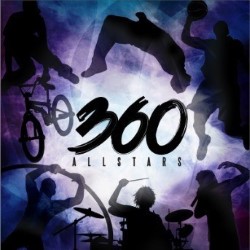 360 Allstars is a high energy, physical performance urban circus. The 360 comes from the fact all the art forms show rotation and the Allstars because the performers are headhunted from all around the world.

The show begins with Gene Peterson and Beau Monga (New Zealand XFactor winner), who provide the live soundtrack, introducing the performers. There’s a 2x world champion BMX flatlander, world champion break dancers, a cyr wheel world record holder and a world class basketball freestyler making up this diverse troupe of international entertainers. Each performance artist displays their skills individually with many impressive demonstrations, drawing gasps, cheering and laughter from the audience. They then appear together in a mock challenge with each other for the spotlight.

It’s a modern take on a traditional circus with acrobats, jugglers, clowns, ringmaster etc all taking on slightly updated and varying roles. The live soundtrack, vocals and beatbox plus the amazing video projections add to the overall polished performance.

This was an impressive display by performers at the top of their game but felt it would have been slightly more breath-taking if they had a slightly bigger performance area. Still very enjoyable and a highly entertaining show for the whole family.

Captain Flinn and the Pirate Dinosaurs 3***