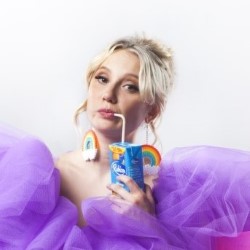 Jenny Bede became known for her online parody of music videos, which have gained over 4 million viewers. She has performed her songs on BBC Radio 1, E4, ITV, written and starred in he own musical sketch show, Jenny Bede: AAA for BBC Comedy and written and presented Mad on Chelsea – the sister show to the BAFTA winning Made in Chelsea.
Musical theatre is making a comeback and Jenny has seen this an opportunity to get in on the action. She’s heard that Cameron MacKintosh (who actually turns out to someone called Graham) is in the audience, so she thought she’d take the opportunity to showcase some of the 45 – 55 musicals that she’s written.
We are treated to her sharp humour throughout her semi-autobiographical journey, including being in an all girl band in 2003 called the Cherry Falls (they never got signed by a record label and when you see the video you will know why). There’s a falling out with a friend (for the purpose of the show is called Becky) who didn’t get a role in Hamilton.
The musical parodies are absolutely brilliant. Taking on Andrew Lloyd Webber, she provides a modern digital age version of the musical Chess. Including a couple sitting in the front row, she performs the hilarious musical about a dead ex wife who turns up as a ghost on their wedding day. Sex sells musicals and her one about being very horny is absolutely brilliant.
A great performance from this talented comedian and writer. Would definitely recommend you check it out (also best value in town at £5 at ticket!).

jenny bede Just The Tonic at The Mash House
Tweet 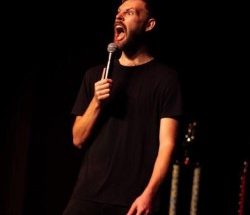