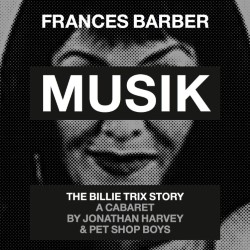 She enters the stage in true rock star fashion, dressed in a black cape with a black eye patch over one eye, (not unlike a certain Madonna’s Madam X!) She explains that Madonna stole this look from her (according to Billie, famous artists have a habit of copying her ideas and style).

Billie was born in Berlin, never knowing her father (this story is narrated in one of the many brilliantly composed songs by the Pet Shop Boys). Her mother never loved her, bringing her up only on soup. She escapes to New York, meeting a young pizza faced boy who she loses her virginity to. This young boy hilariously reappears as the most unlikely character later on in her story.

To her absolute amazement she discovers that you can buy soup in a can in New York. This comes in very handy when she helps out Andy Warhol (another idea that was stolen from her).

You will learn over the next hour that there is nothing that Billie has not experienced or influenced (well according to her anyway). She has been a screen goddess, artist, rock star and disco queen. Billie is the queen of name dropping from hanging out with the Beatles, Damien Hirst, Savador Dali to name but a few.

Frances Barber delivers an outstanding performance, capturing Billie vulnerability and cruelty as she prowls across the stage. John Harvey’s outrageous script is absolute genius as he spoofs artistic types. Her  delivery of the specially composed music, written by Neil Tennant and Chris Lowe, is brilliant, completely drawing you into this delusional rock stars story.