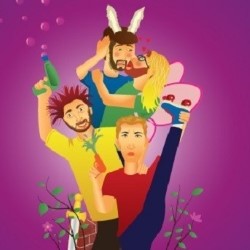 The problem with reviewing shows with a seven-year old is that we sometimes disagree on what constitutes a great show – which is very much the case with this show.
The Rubbish Shakespeare Company is a quartet of hilarious and talented actors. Their aim is to stage a production of A Midsummer Night’s Dream which is a funny and uplifting story involving pixies, fairies, forbidden romance and unrequited love.
The four actors are just brilliant. As in Shakespearean times the men play the female roles, complete with bad wigs and high voices. This had both my little critic and I in stitches. They often break character to correct each other, or to talk to the audience, which is when the big laughs come. Special mention to the actor who deliberately flashed his stomach to “give the ladies what they want”. There are lots of jokes just for the grown-ups, and the actors seemed to be having as much fun as the audience.
I’d say this show is most suited to older primary school kids and over, who will be better able to follow the plot and get the jokes (not the aged three plus that is recommended in the Fringe Guide).
Reviewed by Claire
Pleasance Courtyard, Aug 13-26