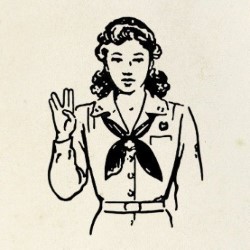 Girls Scouts Vs Aliens is a wonderfully uplifting and fun show for children aged around six and over. The four female actors play girl scouts Ruby, Olive, Tilda and Sydney. It is their last scout camp before Sydney returns to Australia. During this final night they encounter an alien landing and must work together to fix the spaceship, ensure they have food and remain the best of friends.
What is very impressive about this show is the way all four characters are developed. My seven-year-old was asking afterwards which character she was most like (Tilda!), and who was my favourite (Ruby!). The show is really about friendship, cooperation and kindness, which is a lovely change from the usual fart and poo jokes that most children’s shows are about. That’s not to say it wasn’t funny – there were some very funny moments, many of which involved a musical number. My little one is also a girl scout and sang along to some of the songs, which she absolutely loved. All of the children seemed to love the show and were engaged the whole time.
A beautifully acted gem of a show – a must see this Fringe especially if you too have a little scout at home.
Reviewed by Claire
Assembly George Square Studios, Aug 12, 14-19, 21-26