Return to the Forbidden Planet - One4Review

Return to the Forbidden Planet has a cult following and I was surprised to learn that the director was amazed at the response of audiences for tickets. Especially as last years production by the same University group also sold out. This isn’t surprising as they are only performing for one week and considering the wealth of talent on stage. Apart from Dr Prospero (Bill Cronshaw) and Ariel (Tim Minshull) the entire, show including puppeteers, is double cast with the second cast playing additional crewmembers each night. The choreography is well done and all of the voices good to very good, the costumes are as professional as any I have seen. Having seen the show on its second day there were no major technical problems although the sound quality wasn’t always perfect. If you haven’t experienced space flight or the rock’n’roll-sci-fi adaptation to Shakespeare’s ‘The Tempest’ now is the opportunity before they do sell out. **** 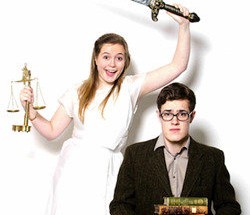