Demetri Martin - These are Jokes - One4Review

If you are doing a comparison on the number of jokes there are per show during this years Fringe, then it is almost a certainty that Mr Martin must have one of the highest ratings. 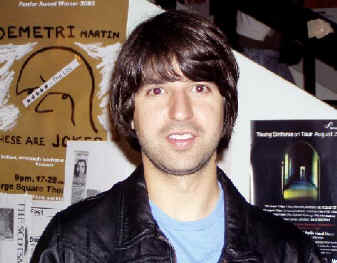 The Perrier Award winning comic from 2003 delivers what seems to be a never ending supply of one-liners in a style a little reminiscent of his fellow countryman Steven Wright, but all with that distinctive touch of the true master he is.

His packed audience lapped up his set, his jokes, some accompanied by him on guitar, or keyboard and glockenspiel and occasionally with illustrations. For all it was over far too soon.

So if you want to see this comic genius you better be quick, the tickets are flying out of the box office and I’m sure you’d not be the unlucky ones to miss out.