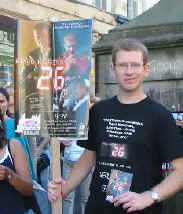 I first became aware of Paul a few years ago when he wrote and starred in the excellent play Spinning Jenny so I was keen to see what his inventive mind had come up with for his stand-up show entitled 26.

The show is a sort of homage to 24, the American TV show, as Paul is selected to solve an immediate problem aided by, or should that be hindered, by his Sat Nav.

Paul is a very amenable comedian reacting well with his audience, and has some very funny material a lot linked to his Cornish origins, red hair and the laptop, p.c. projector and of course Sat Nav help illustrate the similarities with 24 from time to time.