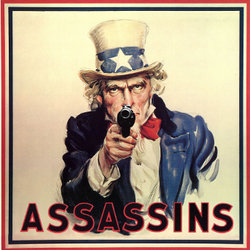 This was an excellent production of Stephen Sondheim’s ‘Assassins’, a surreal look at various assassination attempts of US Presidents, some successful, some not so. It is a rarely done show by companies due to the large male to female ratio required so it is great to see it back on the Fringe with such a well cast produvtion.

In this case, the cast are uniformly excellent and gave engaging characters and detailed portrayals. I really liked the direction of Maria Montague, it made a lot more sense as an audience member than some interpretations have done in the past and it was good to see all areas of the audience being taken into account. This production was slightly cut down which is a pity but you couldn’t see the joins and it didn’t have a detrimental effect.

I must make a particular mention of the live band which was sometimes subplanted by cast members to good effect – really nicely played and with a good balance to the voices. Kudos to the guitar/banjo player who didn’t get a mention in the programme for some deft finger work.