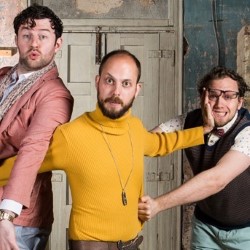 James McNicholas, Owen Roberts and Ciarán Dowd used to be BEASTS a three man successful sketch comedy troupe, but due too artistic differences prior to the Fringe each one had decided to do a solo show in the hour that they had booked, obviously this was fraught with problems as James the wannabe illusionist, Owen the actor with a play and Ciarán as, well who knows what, clash for the performing time.

This is a sketch show with a difference, with a knock about somewhat narrative style fully fill the hour with more than enough laughs to keep any audience happy.

Their new careers intertwine, they end up assisting each other, as well as squabbling, and all leads to a conclusion you just have to see.

I am not the biggest fan of sketch comedy as a genre as I feel that often there is some weaker stuff in any hour set. This is certainly nothing that felt like this in this show, it was pacey, usually frantic, and occasionally even manic but all in all a total hoot. I can thoroughly recommend it to anyone.