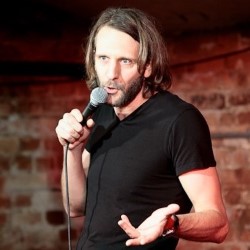 Mr Toulson does not look as old as he says he is, and he’s a very genial grouch, even with the two teenagers in the front row who talked most of the way through the set. It’s not a TV, that person on stage can actually hear you.

I enjoyed this hour, which is straight stand-up of the observational kind. Those observations are thoughtful and intelligent (and belligerently logical in places) and derive mostly from his status as a parent. Some variety was thrown in with some interesting facts and a visual aid, but on the whole this is comedy-by-story. It works well, and Luke is a performer clearly at ease on stage, unbothered by pauses between stories.

I was a little nervous during his opening questions about the referendum and Scottish stereotypes, but he carried it off with aplomb and continued (in his very-listenable-to voice) to deliver a solidly humorous set.