Fred MacAuley: Him Off The Radio 4*** - One4Review 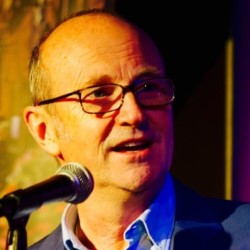 I knew Fred MacAuley had been around as a comic for years, but 27? Yeah really. Also he plied his trade as a Radio Scotland presenter of 18 years until recently so there is no doubt that he has vast experience under his belt and looks totally at home throughout his hour.

MacAuley has a myriad of stories to relate, the Scottish political scene, childhood holidays, his family, the radio situation, Bill Turnbull, Donald Trump and how life has changed since he was a lad and the regional differences in swearing are all ports of call along the way. As the consummate pro he is, the well written and immaculately delivered material has something for everyone and gathered a load of laughs along the way. There is nothing ground breaking in the set just an hour of solid comedy. Oh and MacAuley has also added an impression or two to his repertoire as well. Could this be a new direction for him to explore with the new found time off? Well maybe not!! And why should he change anything anyway? He is pretty damn good at what he does.