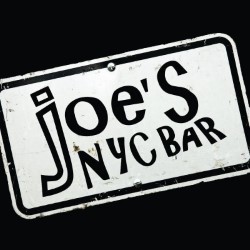 Immersive, interactive theatre can seem quite intimidating and a little bit like hard work for an audience member. Not so Joe’s. Here the set-up is that we’re all sitting around a bar (we are, its a real bar, with real drink for sale) staffed by a variety of characters – Gabriel the manager, the genial director of events, the sassy barmaid, the russian ex bouncer who know owns the bar,and some ‘regulars’ – an alcoholic ex child star and a Trump supporting businessman.

The hour and a half is an extended conversation across anyone who wants to participate with the direction steered by Gabriel. It would seem to change night by night but when we were there it meandered amiably to include which cartoon character people would like to have sex with, Brexit, is there life on Mars and is Trump the new Putin.

The bar room discussions were interspersed with music from a hyperactve australian in a kilt encouraging everyone to join in in YMCA (which they did) or sliding along the front of the bar singing Radiohead’s Creep – hilarious.

It’s a different and fun way to spend some time at the Fringe – if you’ve never expereinced interactive theatre this is the perfect gentle introduction.