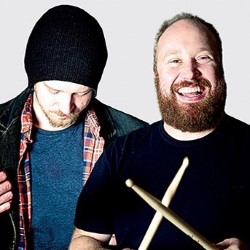 Jonny & The Baptists: Eat The Poor

I went expecting something more sombre – I had expected politics, music, to be mildly amused, and probably to be left with some residual middle-class guilt and angst. What I hadn’t expected was to come about of the show hurting having laughed so much.
The ‘story’ around which the talented duo hang both their excellently crafted songs and their fundamental message that inequality is destroying society, is set in a future where the rich (including Jonny – supported by a brilliantly evil Andrew Lloyd Webber who gets him to write the lyrics for Grand Designs : The Musical) get richer. Meanwhile the poor, including Paddy, abandoned by his erstwhile partner, get poorer. Riots ensue, Jonny is saved from the angry masses by Paddy and we are all urged to make a difference by ending inherited wealth as this is the only way to realign society.
The songs, including ‘Let’s Bury Thatcher Every Week’ are performed with real passion but with enough of a twinkle not to utterly enrage those with more central politic views. The messages about homelessness and inequality are important and well made.

Not one for Daily Mail readers but for everyone else its well worth the ticket price.