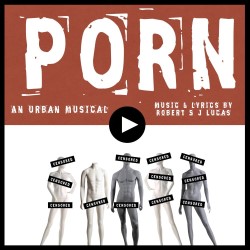 It aims to tackle serious issues – “drugs, homelessness, victimisation, sexism” and whilst originally written as a comedy (!) is now a musical. I spent most of the evening thinking simply why? The whole production is a string of 28 numbers running back to back and they’re very samey. Mostly disco/pop style numbers in a slow 4 to backing tracks of poor MIDI instruments.

Especially at the beginning when the characters are trying to have conversations, they, are, literally, speaking, one, word, at, a, time, to, the, beats, and, it, is, just, so, frustrating. Normal dialogue would be fine and in fact better as it wouldn’t hold back the action. It gets worse when there is e.g. a funeral scene and the characters have to emote over this disco/pop beat, it just doesn’t work.

Vocally the cast all struggled because the songs are too low and hence too quiet and there was too much mumbling and lack of projection overall. Ashleigh More as Vix however does get some high songs and has a lovely voice.

Generally the whole production felt incredibly amateurish with genuine toe-curling cringey moments, there is the old ‘MT hand acting’ and the characters are flat and one-dimensional.