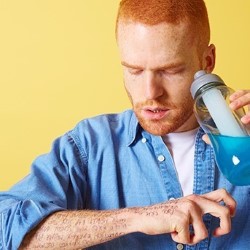 If you haven’t seen Goose, whyever not? It’s an amazingly fun, ridiculous hour of absurd premises and tenuous links exploring the nature of context and misdirection. The single weak section of the show which nearly lost them a star became the entire reason they kept it. Nothing in this show is incidental.

Goose perform high energy – and sweaty – theatrically told stories, usually with an element of mortal peril for Adam Drake, the ‘one-man’ in ‘one man show’ (plus five piece band, huge tech team and other support). This time, Mr Drake’s got himself in trouble with both his girlfriend and the law when she disappears after an argument.

The show is a study in things taken out of context (which suddenly make sense later) and misdirection – things that might not seem relevant return unexpectedly, and things that you might dismiss as just another quirk of the show become pivotal plot points. There’s also – as you’d expect from Goose – great use of the audience throughout, and this year some of it has the potential to not just divert but utterly derail the show. It’s good natured though, and none of the audience interaction is cruel.

Mr Drake might be losing his voice a bit at this point in the Fringe, but nothing detracts from the fact that this is a wonderfully funny, feel-good show.