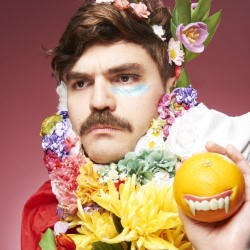 Should anyone wish to know, I am instructed to inform people that this show was ‘significant’. This means: ‘sufficiently great or important to be worthy of attention; noteworthy’. I am willing to grant that it is a sufficiently great show and is worthy of the attention of those who like funny things, silly things, and to participate.

There’s no explicit plot line to this comedy, just a series of 90° volte faces in three-dimensional space. Sometimes the lines cross over each other again, most of the time they don’t. It started with Geoffrey Chaucer being mesmerising in wonderfully obscure middle English, and sallied forth from there. I am continually impressed by the willingness of audiences to grab hold of the merest suggestion from a stage and throw themselves in to participating whole-heartedly: thus did we end up in a ‘doop’ echo chamber, and bouncing in our seats while J-L shook the world.

This show demonstrates J-L as an experienced and confident performer, fully willing to flash his willy on stage because (as far as I can work out) it’s a willy and a willy out on stage is always at least mildly amusing. ‘Character comedy’ might be a useful label for this show, though there’s always the undercurrent of J-L poking at things, asking ‘will it be funny if I do this?’. Generally, the answer is yes.