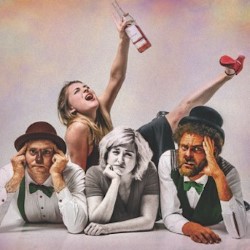 This was brilliant! It’s not quite ‘The Wizard of Oz’ but has the gist of the plot including songs from Wicked and The Wiz for example. The small cast play all the characters, the musician and the host but the whole USP is that one of them is absolutely plastered by the time the show starts and then keeps drinking ‘on demand’ of the audience. Then light the blue touch paper and stand back!

Tonight it was Dorothy’s turn and what a laugh it was, from going completely off-character or feeling amorous with the scarecrow to running around the venue trying to escape with the cast in tow. And poor Toto! Well done to the rest of the cast for trying to keep things moving and on plot, this is just as funny. And kudos to the musician for eventually getting Dorothy to sing against the odds!

Great entertainment, I laughed so hard I almost wizzed all over my oz.