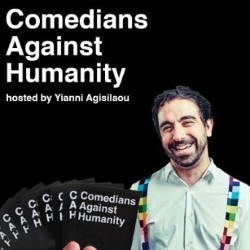 The format for this show is strong, and the compere is excellent, so the quality and amusement will vary on the quality of the guest comedians and the willingness of the audience. I saw three excellent contributors, and the audience was engaged enough to make the show work. Having said that, I don’t think the four people sitting next to me laughed during the entire show.

The show uses Cards Against Humanity – a distinctly un-PC and often offensive card game – to provide prompts for comedians to improvise to. The audience is issued with cards before the start of the show, and is encouraged to shout out (in)appropriate suggestions from their cards for particular situations set up by host Yianni Agisilaou. Mr Agisilaou’s introduction to the concept of the show and the importance of context set the tone well, and he (and the comedians) did a great job of dealing with the one heckler who wouldn’t take a hint.

The comedy will vary depending on performers, but Kathryn Placing, James Nokise and Tim Renkow offered some flashes of brilliance amongst some solid comedic improvisation. About half the audience had been to a CAH show before, and I did feel a little like I’d stumbled into another Fringe cult – but if this show becomes an institution, it deserves that place.
***
Reveiwed by Laura 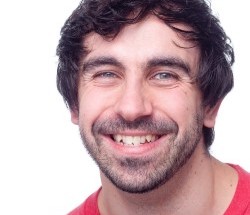