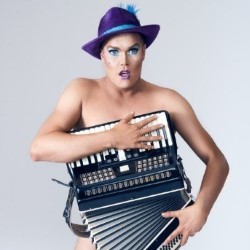 In the middle of George Street is a bright blue giant container box, which I thought was being used for extra chairs and equipment however turns out to be a venue called The Blue Room. I was getting concerned how the large queue of people standing behind me were all going to fit into this box. However, it turned out to be quite a Tardis and is one of the more comfortable venues I’ve been to. With German efficiency not at its best the show was running 15 minutes late however, this was completely forgotten about as Hans burst onto the stage in his floral hosen getting the audience singing along to the Sound of Music – Do Re Mi. His interaction with the audience was absolutely brilliant, building great rapport in particular with Lynne, Alastair, Andreas, the OAP and the 16 year old. The costumes were suitably camp and sparkly, which were made by his mother, who apparently has a very similar personality to the mother from I Tonya. There is audience participation so watch out if you’re sitting in the front row. I don’t know what they gave Andreas and Alastair to drink back stage but they absolutely rocked the dance routine and costumes they were given. Apparently, there is a rumour that Hans is not actually German, however to prove his authenticity he demonstrated his accordion skills providing a brilliant Polka compilation of Scottish music, including songs from the Bay City Rollers, Wet, Wet Wet, Shirley Manson and Susan Boyle. The brilliant band The Ungrateful Bastards accompanied this. The evening was Wunderbar (Hans – just in case that means wonderful and why I’m giving your show five stars).
*****
Reviewed by Lynn
Assembly Rooms – The Blue Room
21:50
5th – 11th/14th – 19th