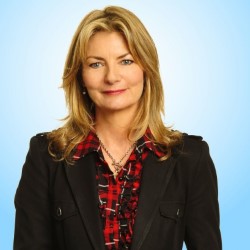 Mixing the inevitably funny, well observed and immaculately delivered show material with her undoubted skills of crowd work, all with hilarious results generating howls of laughter throughout her hour.

She oozes professionalism from the moment she hits the stage, with crowd work, identifying characters that were later included in things, before moving on to the main set. No messages here just Jo chatting about her year, her husbands attempt at dying his hair, an anniversary trip to New York, snippy receptionists, airport security queues, Harrods shopping, pre-mobile phone communications, which was a learning curve for the younger viewers. Also changes in long term relationships, and of course the differences between the sexes in respect to titillation, sexual promiscuity and looking after a 6 year old, all are stopping off points during the way, way too short hour.

She uses all the tools of her trade to make the show something for each and every one in her audience, and offers a few of her own thoughts as to how things could be improved… and don’t forget the multitudinous laughs along the way.
*****
Reviewed by Geoff
Stand 3
19.40 to 20.40
Until 26th (not 13th)