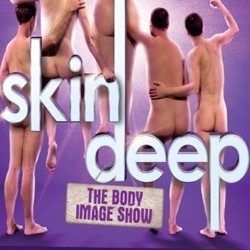 Glancing at the poster for Skin Deep I initially thought that this was a naturist show. However it turned out to be a very entertaining musical comedy about body image and the perceptions around this.
With their brilliant harmonies, characters Diana, Phil, Max, Dan and Richard start the show singing about their own insecurities. Through their comical sketches and original songs written by Chris Burgess they describe how it feels to not fit in with the perfect body image – being too fat, too thin, not good looking enough. There is nothing they are not prepared to cover from the hilarious rendition of the song “My Foreskin and Me” to experiences with Tinder and streaking at a football match (the comic timing is brilliant as they cover his dignity in this particular sketch). They make excellent use of the stage throughout the performance as they perform their wonderful choreographed routines.
This ensemble worked really well together. Diana (played by Shani Cantor) has a fabulous voice. The boys played by Aaran Blackburn, Nick Brittain, William Frazer and Shaun Riddick do a great job of building up to the climax of the show (expect nudity).
This is a fun musical comedy that sends a positive message that beauty is skin deep and that we should love ourselves for who we are. That said I don’t think I’m quite ready for their “clothing optional” performance yet. Don’t be shy, get a ticket and let this amazing cast encourage you to let your inhibitions go.
****
Reviewed by Lynn
Gilded Balloon Teviot
21:15
Until 27th 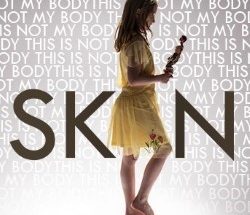