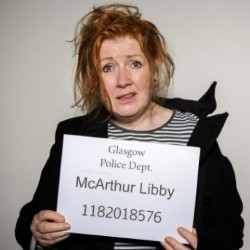 Libby McArthur, a ‘weel kent’ face for fans of River City, brings this one woman play to Edinburgh, recounting her memories of the time she ended up in court for not paying 6 parking fines. Looking back to the 1990s Libby explains that it was an era where she was strapped for cash despite being in a soap opera, spending her money before she had it, and having to look after her son. When she had a chance to try and break into the West End, she did it so whole heartedly that she ignored the consequences of what would happen if she left her car abandoned after jumping on the train.
Most of the action takes place in the cell as she awaits her court appearance. Using her cheery Glaswegian brogue, Libby plays the parts of herself and her fellow cell mates, with Sharon – hard as nails but with a heart of gold – the dominant character. As Libby awaits her transfer to prison she realises that far from not belonging there, she is the same as her cell mates. Your life chances inform your life choices – everyone needs help sometimes.
Libby McArthur gives an incredibly warm performance and gives her all during the show. As uproarious cell mate Sharon, she dominates the stage with some gritty dialogue and you miss Sharon when she isn’t in the scene. The ending is poignant and satisfying and this play, written by David Cosgrove,and Libby’s performance deserves a far bigger audience than the one in attendance today.
Reviewed by Rona
Gilded Balloon – Nightclub
2.45pm
Until August 27