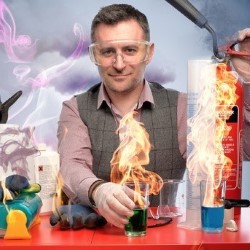 The show description states “think science is boring, think again” and that’s exactly what Mark Thompson’s inspirational show does.
Before the show starts there are various objects on the stage so you know there’s definitely going to be experiments. The screen behind displays interesting science facts until the show begins.
Mark starts by asking everyone what colour fire is, with most saying orange and red, he then demonstrates that it’s the fuel that provides the colour and not the fire itself by lighting various brightly coloured liquids. There are a few gasps from the children and he has their interest immediately. On the stage are two floating balloons, one filled with helium and the other with hydrogen, Mark explains the difference in the gases and what happens if you burst them with a flame, again more amazement.
There are quite a few more experiments, including using the Van Der Graaf Generator on one volunteer, causing amusement from the audience. Then there was the flying toilet paper, the film canister rockets, a hearing test in which the children performed far better than the adults and making elephant toothpaste.
Mark is very relatable; he shares his knowledge without patronising and the show is informative and entertaining. There is a lot of audience participation, with a few children and even one adult assisting him on stage.
He also gives details of experiments you can do at home, under supervision and wearing the correct protective clothing of course. He really makes science interesting and motivates the children to continue on their learning journey.
A brilliant show for all the family.
*****
Gilded Balloon at the Museum – Auditorium
16.30 (1hr)
Until 25th 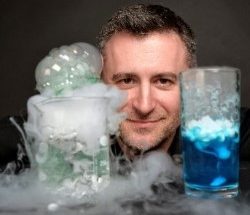