Nish Kumar: It’s in Your Nature to Destroy Yourselves 5***** - One4Review 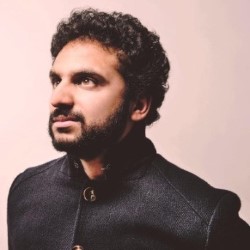 Nish Kumar first performed at the Edinburgh Fringe 14 years ago as part of the Durham Revue, then as part of comedy duo, the Gentlemen of Leisure with Tom Neenan and since 2012 as a solo performer. The last few years have seen his career absolutely rocket and he now commands audiences in one night greater than for the whole run in previous years.
This young, very socially and politically aware rising star is now also a regular television and radio favourite, being host of the Mash Report on BBC 2 and regular appearances on Mock the Week. He has also been invited to take part in Question Time on a couple of occasions, although he doesn’t feel qualified to do this, he speaks more sense than most on it. Even if he is mistaken for another Asian comedian by a prominent politician.

His show of course is political satire so he cannot obviously ignore the car crash that is Brexit, the only people who can opt out of hearing about it are the ones that won’t be affected. He speaks of the “fair” democratic system that elected Boris Johnson as our new prime minister, and the lack of preparation prior to triggering article 50 with a great analogy for the process. If only his theory on Jacob Rees-Mogg were true, oh how we would laugh!
He discusses Trump, Teressa May’s tears, Kent, the tory leadership battle and how he managed to insult two of the contenders. He also discusses the reaction to murder/terrorism if the perpetrator is white or not, including the sympathy given to “Incels” who kill. A run in with NYPD, how non-white people have a system for packing because they will be searched at airports. He has several funny anecdotes involving his parents and how some family members even voted for Brexit or Trump, they have become so integrated in society and so much more.

This show is not a lecture, it is clever comedy about serious issues that Nish has a way of making you think about and laugh at the same time. The hour flies in and people are visibly holding their sides from laughing so much. He’s only here until Sunday and is selling out fast so grab a ticket if you can. Unless you need to stick your fingers in your ears to avoid current affairs, then just stay at home.
*****
Reviewed by Sharon
Assembly George Square – Gordon Aikman Theatre
19.00 (1hr)
Until 25th