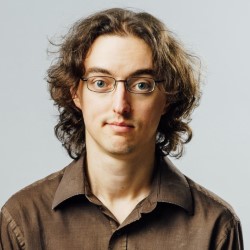 The most awkward thing about this show was the bucket speech, which Mr Brush clearly doesn’t enjoy. Despite the blurb and the title, this isn’t comedy that will make you cringe. Mr Brush’s foray into improv based on audience suggestion had the most potential to end in disaster. But however uncomfortable Mr Brush might have found it, a polished comedian failing to find something funny to say about a truly ridiculous phrase – and being miffed about it – was gold.

The show recounts Mr Brush’s attempt to become less anxious. Someone gave him a book, and from this the structure of the show is formed. It’s got a pleasing symmetry, and allows for wandering around in stories about his life and experiences without going so far away that the point is lost.

There’s a variety of comic fodder and styles, from almost-lairy jokes about sex, subtle ones such as the one about Goddo, and unexpected ones like when his dad read him bedtime stories. Mr Brush has good stage presence and delivers his material with confidence and verve. Genial and affable, with almost instantaneous audience rapport, this is an entertaining, enjoyable hour.

Reality Sucks! 2** and one half