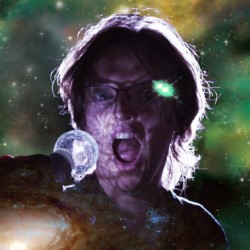 This show in one word: subversive. Ms Hunter starts the show with the usual format: tell something personal so the audience can relate, make yourself vulnerable so they’ll like you, and chat to the audience so you’re approachable rather than aloof. And then she upends the expected format for each element entirely, so that if you like that sort of dry, smart, insider I-see-what-you-did-there feeling of being mildly smug because you worked it out (and I do), you’ll be right at home.

Ms Hunter’s brand is a sort of low-energy sharp, dry pithiness. That’s not to say lacklustre, rather, economical. The show has lots of odd starts and mild absurdism, demonstrated most clearly in the silverfish, which shouldn’t work, but does, both nicely rounding off and summing up the nature of the show, which has been a demonstration of her technique for building a brand, with political and social commentary along the way.

The show contains some well-executed audience interaction and participation, which, in keeping with the low-energy feel of the show, doesn’t require any of the audience to stand up. Some high points during the show were enlivening, but ultimately there wasn’t enough of the acerbic commentary to give the show the momentum energy would normally provide.

A well thought out show with laid-back wit.