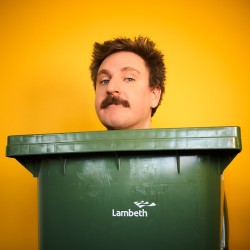 This show’s brilliant. It’s random and inane throughout, and poignant and heartbreaking for the duration of a mayonnaise metaphor; it hold up flaws simply in order to air them, and then breaks the tension with the most unexpected and perfect comment. It’s hilarious fun, but probably only if you like the sort of thing where extreme care has been taken to craft the exact manner in which to drop bread on your audience, and the appropriate comments with which to accompany it.

The show is in a yurt, which makes a nice change from the usual sauna to furnace, with benches all around the edge, so the performer is in the middle of a double circle. This means the audience opposite does rather become part of what you’re observing about the show – and some people had clearly come to the wrong show. Their faces were priceless.

Mr Bryce stoats into the space in an alligator costume, and spends the next hour proving his own assertion that you can be an adult and still enjoy silliness. He tweaks noses and enquires about make-up, explains about the bin and the consequences, and recounts his tale in the most oblique way possible. He’s both utterly committed to the performance of the show, and apparently unconcerned there are only three people out of fifty in fits of giggles. It is an exquisite silliness, delivered by a master craftsman. Wonderful.