Joz Norris: The Incredible Joz Norris Locks Himself Inside His Own Show, Then Escapes, Against All the Odds!! 5***** - One4Review 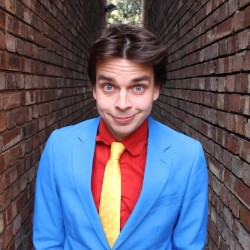 Joz Norris’s disembodied voice had the audience in the palm of his hand even before his body appeared on the stage. He seems very lovely, and this, along with an unshakable confidence in performing and utter commitment to his material, meant that the audience was with him even unto the final act, which was an entirely appropriate conclusion to an entirely off-beat show.

This show is about Mr Norris’ relationship with his father. Or something. It could also be about his attempts to express something but getting tangled in the language and the emotion. Or it might be something else, or it might not be ‘about’ anything, and simply be about making something joyous and silly to watch, which it definitely achieves.

Joz is, and it bears mentioning again, very confident in his performance; so much so that he manages to normalise sticking string to the wall for about half the duration of a show. It becomes quite mesmerising after a while, and you forget that what he’s doing is in fact quite a strange thing to be doing, let alone watching him do it…

Mr Norris has excellent pace and timing, and his conversation style of delivery never ever sounds rehearsed or recited. He’s also never distracted from his monologue by the string-sticking, which is a feat in itself.