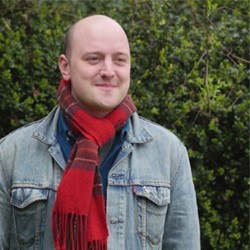 This is a slow moving show – roomy – which has lots of pleasing elements rather than outright belly laughs, delivered by an apparently awkward, genial, northerner. The show ponders along through a variety of subjects and bouncing off various props – including the promised mug tree – contextualising some rather nice whimsical songs, including one I particularly enjoyed about taxidermy.

Mr Foster manages to both appear rather awkward and fish-out-of-water on stage and use this as a tool to engage and endear the audience, which worked well for the most part. He had a few different techniques for bringing the audience in to the show, and a few more equally good ones for shutting them down when they went too far.

Despite all of this – and the flashes of excellence in the songs and in some of the word play – I didn’t find it a particularly memorable show, without anything in particular to make it stay with you beyond leaving the venue.

Promising, but not there yet.

Joz Norris: The Incredible Joz Norris Locks Himself Inside His Own Show, Then Escapes, Against All the Odds!! 5*****