There are a lot of shows who cater to the late-night, alcohol consuming, ‘up-for-it’ Fringe attendee.  It’s surely a given that at some point in your Fringe viewing you attend a show that finishes in the early hours of the morning and then totter home over the Edinburgh cobbles, grabbing a bag of chips (“salt ‘n’ sauce”) on the way.  However, there are fewer shows who cater to that self-same punter the next morning in their hour of need.  Where can a bleary-eyed, slightly fragile fan of good comedy go as they emerge, Bambi-like, into the morning air?  Well, it appears that Matt Forde has an idea.

Employing a similar format to his Lock-In, that of a group of mates sitting about having a chat, Forde has struck upon a clever concept to cater to his audience.  Attend the Lock-In the night before for some lager fuelled, no holds barred conversation and then the next morning stumble back for a slightly gentler version of the same.  The pints of lager are replaced by steaming cups of coffee and the barman replaced by the morning papers.

The day I attended Forde was joined by comedian Seann Walsh for a look at what was going on in the world.  As the host of a show on TalkSport, Forde has the natural ability to keep a conversation flowing.  However, the real skill lies beyond simply sustaining the chat, with both managing to find humour in any topic they settled upon.  Walsh’s bemused lackadaisical approach to the subjects played off perfectly against Forde’s more strident political viewpoint.  There was also a nice little glimpse into the camaraderie that exists behind the public face of performing at the Fringe, with tales of late night exploits and anecdotes about some well-known names.

This is a consistently entertaining hour of unplanned chatter and although it might appear to be a bit ‘blokey’ I have to say that as a ‘girly’ I heartily enjoyed it.

Venue – Just the Tonic @ the Caves

Loretta Maine – I’m Not Drunk, I Just Need to Talk to You 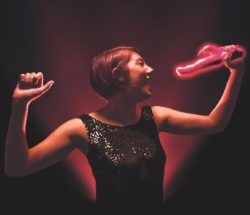