This Is Soap C Theatre - One4Review 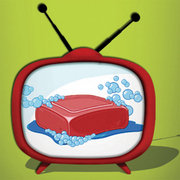 It has been a few years since I have been at this show so I thought it was about time I returned to see what was happening in the world of bubbly stuff.

The show runs everyday of the Fringe as the intrepid seven actors perform a series of unscripted episodes, one each day, giving them a chance to use all the devices of improv comedy and their undoubted acting ability.

Now I think everyone knows the concept of the performance relies on audience participation, and the crowd I was in were reasonably up for this. I’d guess by week one proper a following will develop and seats could be hard to come by, so why not get in early and of course with every show different, you can always return and again.