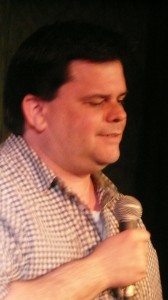 The calendar might show it is late May but with the Edinburgh weather feeling like mid-winter where was the best place to keep warm on a Thursday night? Well as often before I elected to visit The Stand to see the red hot comedy and of course partake of the excellent meals on offer with a visit or two to the bar to lubricate the chuckle muscles. 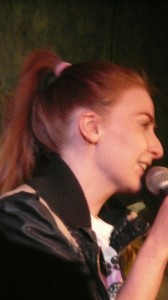 form. It is a little strange to see him without usual buddy Garry Dobson around, but he can compere with the best of them. As always this job entails warming up the audience explaining the format to the newcomers and identifying candidates for future amusement both for himself and those to follow. Whether it was the crowd, or just down to Murphy’s skills, probably a bit of both, but the atmosphere was electric as he introduced opening act Chloe Philip.

Now Ms Philip is maybe small in stature but makes up for this with her comedy talent. It would be fair to say that I think she endeared herself to the audience with her eclectic mix of material on subjects such as 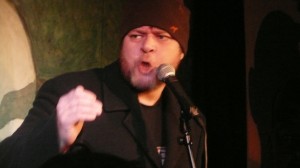 waiters, keep fit, swimming, stopping smoking and being ‘flashed’ at, together with a couple of her quirky self-penned comedy songs seemed to hit the right note. I particularly liked the Lambrini Girls segment real laugh out loud quality.

Following the first interval and some more Murphy magic, the larger than life character comic Davey Strong hit the stage hard, gathered up one and all with him and absolutely stormed his set. The self-styled Edinburgh’s toughest doorman / Celebrity bodyguard had one and all in stitches, belly laughs were the order of the day throughout. Strong really has it all. Stage presence, charisma, quality material and I reckon star quality.  i really want to see this guy again with a longer time allocation and I have confidence that he 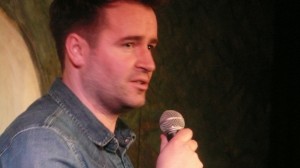 on his way to bigger and better things.

Jarleth Regan was tasked with the unenviable task of following on but then he is a consummate pro so I no doubt he would rise to the task which he well and truly did. Completely different in style Regan form Eire but now London based breezed through his time with a collection of material some frighteningly topical other stuff more observational on relationships, Ireland, trapping hand in car door, celtic weather and the recession as just a few examples. I have always found him an enjoyable comic without being absolutely blown away, but tonight I saw what he is really about, that being a top quality act, 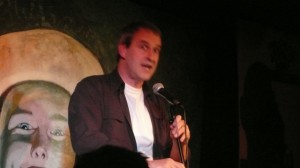 After the second interval and prize draw Stu introduced to the packed crowd the headliner Boothby Graffoe. Now he has been away from the comedy scene while trying to get his screen play made into a movie, but while this hasn’t happened as yet at least his legion of fans are being treated to him back on stage delivering his special brand of comedy mayhem. I count myself as one of these and am pleased to report that he has still got his magic with a set that was bursting with anecdotes, gags, his special songs and a slight tendency to drop into a dialogue with himself utilising his ability to do crazy voices. Graffoe has the innate ability to captivate. He has the charisma and presence to engulf the club and his slightly surreal songs accompanied by his mean guitar playing, was definitely fare that was well received by one and all. As always his time goes so quickly it seems his time had barely started when it was time to finish. But unusually for the Stand there was an encore, and even better for me the closing number was my favourite of all his songs.

It was rather later than normal, but nobody was complaining, that we spilled out of the club at the end of one of the best nights I have had the pleasure to see in a long while. The Stand runs comedy nights virtually every night of the year and all the line-ups can be checked out at www.thestand.co.ok