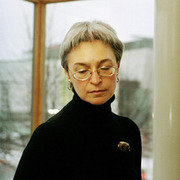 You have to stand all the way through this show, and it’s hot, and it’s played out, at several points, inches in front of you, yelling in your ear. It’s visceral and horrific and truly manages to get the message across.

Anna is an account of Anna Politkovskaya, a Russian journalist critical of the government, outspoken against travesties of justice and eventually murdered in a lift. You might have heard of that last bit in the news, but it’s unlikely you’re familiar (I wasn’t) with the awful details of the threats and attempts to silence her she suffered. According to this work, Anna was attempting to inspire or incite rebellion or challenge to the practices of the government. The audience becomes the target for the plea to action – why haven’t you done something about this? Why don’t you protest? I must confess there were several points where I wanted to yell at her tormentors and tell them to stop.

But I’m not sure what more I could do. The play doesn’t offer any suggestions. But it does force you to confront those questions, to consider, what can I do?

The Wrong Side of the Door