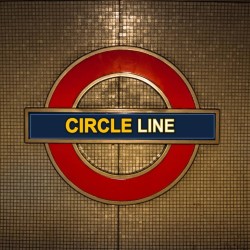 A straightforward piece about different characters stuck on a broken down tube train. Most of the usual stereotypes are here and in the main we get one song per character with a little interaction between each of them. It was a bit slow to start until more characters came in and we could have had more background action happening to help the scenes be a little less static. There was also a strange layout of seats (all in a row) unless this was a very one-sided train! It is theatre though, we got the point.

I liked the songs, they were very good but even though the actors were miced they were not balanced with the live band and so we couldn’t make out most of the singing and hence the storytelling which is such a shame. Some choreography helped break the stillness of the setting, perhaps with development the characters could be taken ‘out of’ the train into other settings to give a bit more storyline etc.

All in all a fun show with catchy songs, if only the sound could have been sorted.