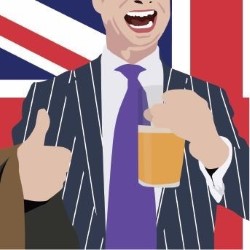 It had to happen some time and here we are with a satirical musical kind of based on the rise of Nigel Farage. I’ve seen some complaints that this show is vulgar, crude, racist etc. but that’s the point. Just accept that and enjoy it.

The show traces the beginnings of Nigel (looking very much like Arthur Dent in his dressing gown) and the party, goes through to a fictional election win and then in the second half, as in Into the Woods, we see what happens after they get what they want when things begin to go wrong.

It’s definately a show to get bums on seats but when you look at it it’s nothing outstanding. The music is quaint but you won’t be going out singing any tunes, except perhaps for the ‘panto song’. What is good though is just how many jokes and references they manage to cram into the script and the characters. I loved the Boris character and I even liked the random wee Nicola Sturgeon – a very brave thing to do in Edinburgh!

All in all a good bit of tongue-firmly-in-cheek humour, if sometimes played too much to the front audience and with occasional sound issues.

Caledonian Folk and Blues at The Guildford 21st Year 4****