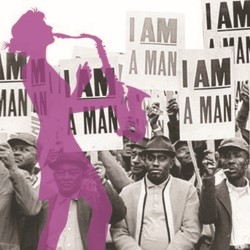 This got off to a fine start with some very powerful acting from the father. The intensity wasn’t kept by the rest of the cast however although kudos for performing within the constraints of such a small space with the audience literally in their faces.

It wasn’t entirely clear when this was set, it seemed to come across as much earlier than intended, I spent a lot of time thinking the music wasn’t period with the piece until I re-read the show information (1968). The music was one of my two issues with this piece as I often wondered why the characters were singing in the first place. The music/songs within the action (i.e. those played by characters) worked perfectly well but for me most of the other songs just seemed out of place and would be better served by dialogue, they didn’t really move the story on or have an emotional reason for being there. There were also issues with high notes and tuning at times.

My other issue was earrings/piercings! They didn’t fit the characters and period.

Having said all that, the story is good and there are lots of good strong, if stereotypical, characters. The acting in the main was good but especially from the father. The accents were also very good and maintained well.

Lots of potential here for development.