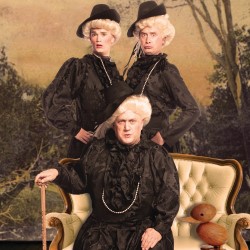 What got me hooked on this show was the sales pitch when they gave me their flyer on the mile. I heard at least three other people in the queue say they’d been seduced the same way, and probably more given the full house.

This play has three actors who play three Queens (the duck plays itself) trying to stage a production of Earnest. Since there are only three of them, each has to play several parts, as well as battling various impediments – some intentional and written into the play (personal rivalries, venue demands), and some not, like the props misbehaving.

Having seen or knowing the original play does not seem essential to understanding – or enjoying – this play. It’s not really about Earnest, but the extracts from it allow fun-poking at overly-pretentious theatre and a particular theatre-type (although the characters have much more depth than mere caricatures). The dialogue is sharp and the insults inventive, frequently very earthy and convincingly venomous, as well as being genuinely humorous.