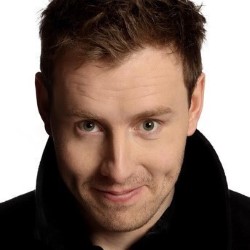 Perfectly inadequate is how Andrew Ryan sees himself although the audience would not agree. This funny Irish man, similar in looks and style to Ardal O’Hanlon, kept the audience amused for most of his hour long show. Andrew says he suffers from very low self esteem so isn’t surprised when things go wrong for him, such as failing at relationships which he never really expected to work anyway, especially with 2 single beds, in separate cities and his wet towel problem. He says he finds it hard to meet a woman now he’s 33, a fact he told us a few times, whether he’s having a crisis with his age or just for the comedic effect of an Irishman saying 33 I’m not sure. He finds mature women have lists of requirements that are unattainable so he’s doomed from the start, although he does practice smiling with his eyes, if only he knew what it meant.

Ryan is a great story teller and there are lots of laugh out loud moments throughout. He tells humorous tales of going back home for visits, his relationship with his parents, memories from his youth, his nephew’s christening, a brush with the law and his paranoia which includes him thinking that on board train announcements are aimed just at him with the rest of the passengers being told to keep away from his carriage. He also has an interesting analogy on giving engagement presents.

While most of his material was well accepted some fell a bit flat but overall it was an entertaining show worth going to see.